The second part of the Victoria Gallery exhibition of The Ruralist paintings has been around for a couple of weeks now. I have visited it twice, mooching around trying to find out if I actually like the paintings. There are several Silbury ones, my favourite is of Silbury Hill with the moon behind and the river curving its way towards it, moonlight sparkling on the river. The large owl with a tiny Silbury behind is also good, as is Inshaw's Pussy Willow painting, (a puss sprawled on the table beneath) and May tree painting as well. So on reflection I am happy with Inshaw's paintings. 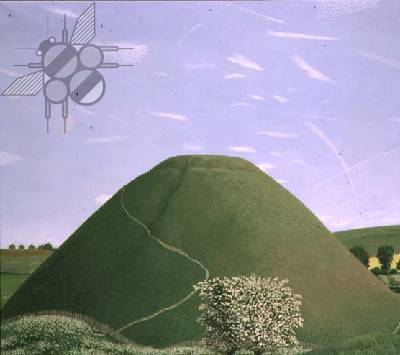 Portrait of Silbury Hill - David Inshaw, to quote from the catalogue. "that beauty of association is far superior to the beauty of the aspect" Thomas Hardy 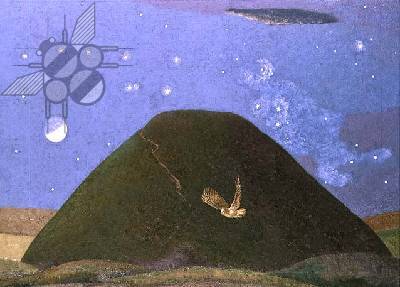 Silbury Hill on a Starry Night - David Inshaw...pretty, butdoes it look like a green pyramid? 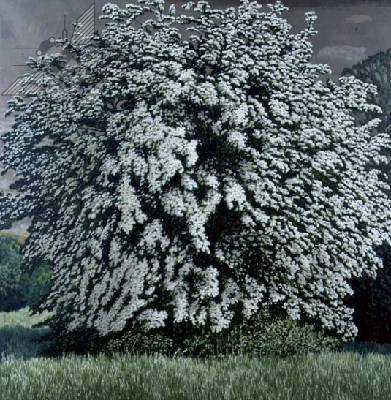 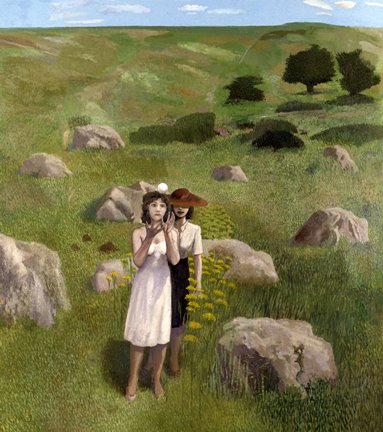 David Inshaw not in the exhibition, but another favourite of the sarsens on the downs

The other painter to catch one's eye is of course Graham Ovenden, "All Hallows (The Sea Cathedral), and this rather strange painting takes its story, or at least its symbolism from a tale told by Walter del la Mare of a demonic restoration happening unseen in the cathedral of All Hallows. It also of course recalls to mind the church of Dunwich under the sea off the Norfolk Coast. The real colours are much more vivid, and it's large canvas does have an eerie feel to it, echoed of course by the other large canvas of Ovenden, the Tower of Babel, a spookily frightening straight edge jagged rock in a very flat landscape. 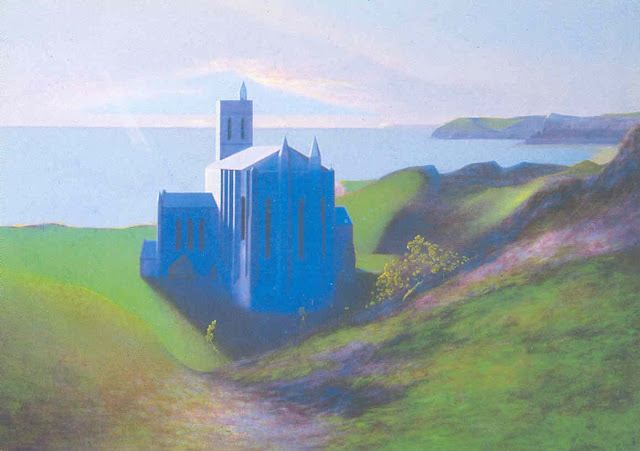 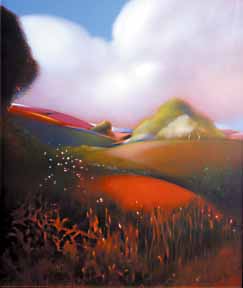 This our Life, exempt from Public Haunt,
Find tongues in tree, books in ye running brooks,

Sermon in stones, and good in everything" Taken from 'As You like It - Shakespeare


There is a striking collage by Graham Arnold, that illustrates a favourite piece of writing of mine by Jefferies ('the grass-grown tumuli 'at Liddington Hill). It is a cabinet of secrets, and you have to study it to see the detail, the bulk of the painting is rows of 'bar coded' colours, but underneath, the cabinet colour reflects the white chalky dust of the Wiltshire Downs, with odd writings scribbled here and there. And again I would like to quote from the catalogue "The abstract personality of the dead seemed as existent as thought. In effect memory collapses time and the soul lives beyond time. " A graceful explanation of what Jefferies must have felt as he mused by that overgrown tumulus - the actual essence of life, and the dead from the past still throbbing in the air, the moment when we push past time and experience the eternal.

Posted by thelma at 4:54 AM No comments: 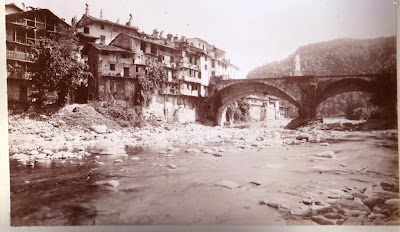 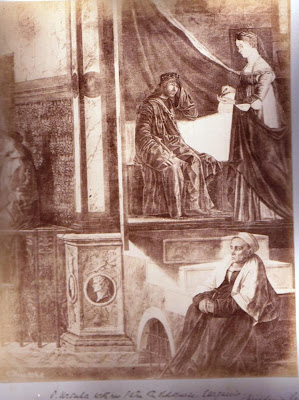 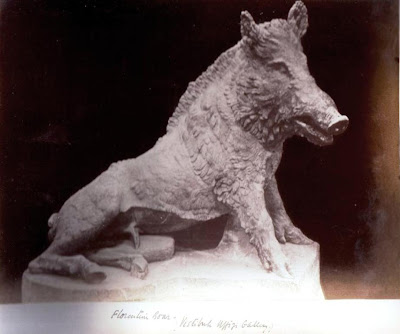 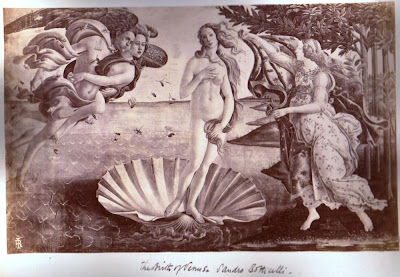 the Birth of Venus - Sandro Botticelli 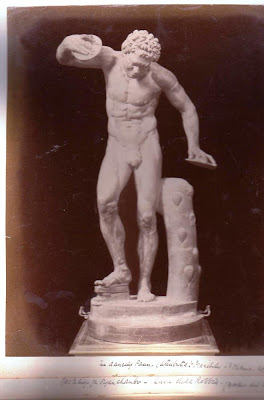 the dancing fawn -Uffizi Gallery
Posted by thelma at 3:28 AM No comments: 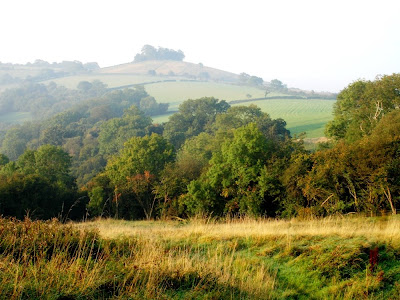 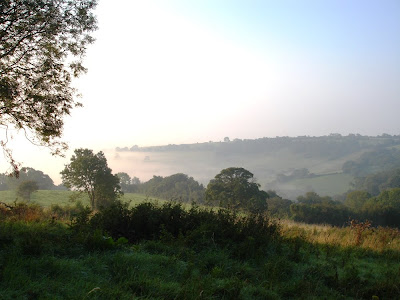 Posted by thelma at 1:37 AM No comments: 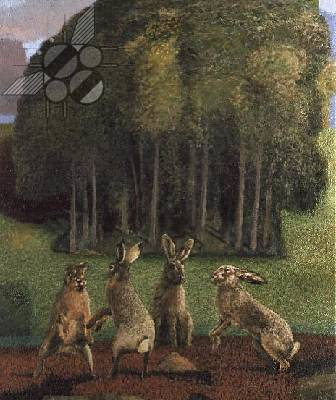 Today I went for a quick tour of the second part of The Ancient Landscapes Pastoral Vision at the Victoria Gallery Bath. This second part covers more of David Inshaw, Graham Arnold, and Graham Ovenden paintings, The Brotherhood of the Ruralists.
There were about dozen David Inshaw's painting of Silbury, two with owls, and my favourite of a Night Silbury with stars and the glittering river winding its way towards its. His May Tree paintings were also fine, a flavour of spring and fresh greeness against the myriad white blossoms of the may flower.

Laurie Lee ("Their work shows an acute recognition of that mysterious world that still holds its kingdom a few yards from the motorways, a world of spirits, shapes and ancient voices that reverberate back to the caves").

There is nevertheless an unmistakeably modern edge of alienation to some of their work. This is most evident in the dreamscapes of Graham Ovenden, with their otherworldly trees and rocks, and indistinct horizons. Some of these evoke an ineffably English, timeless landscape, but some, with their use of bright reds and Mediterranean blues, do not suggest any recognisable place at all, leaving the viewer feeling adrift and disconnected. Overall, however, Ruralist paintings are usually identifiable with distinct places, and expressive of a particular kind of English genius loci.
Posted by thelma at 9:39 AM No comments:

From western lands beyond the foam,
We sought our English fathers' home
By few or known or sung.
Which 'neath the quiet English skies,
far from all busy haunts it lies
The wide chalk downs among.
Huge druid stones surround the spot,
Which else had almost been forgot
By the great world without.
The mystic ring now scarcely traced
Is by a grassy dike embraced,
Circling the whole about.
Deep hangs the thatch on cottage eaves,
And buried deep in ivy leaves
The cottage window gleam.
There little birds fly to and fro,
And happy children come and go
With rosy cheek and rustic walk,
They curtsy for the gentle folk,
As they the strangers deem.
With pinks and stocks the beds are gay
,And box and yew their shapes display
Fantastically trimmed.
And each small garden overflows
With scent of woodbine and of rose
Above the borders trim.
The ancient little Norman church,
With quaintly medieval porch,
Stands 'neath the elm tree tall
Sunk in the graveyard plot around,
The moss-grown headstones scarce are found
Few stoop the lettering to trace
Which time's rude hand will soon efface.
Some there may be of highborn race,
But none the names recall.
The many gabled manor house,
With winking casement sheen,
Seem in the summer light to drowse
And dream of what has been
And we may dream of earlier days
,When the old convent marked the place,
When nuns in gown and coif complete,
Paced the green paths with quiet feet,
And gather herbs and simples small
Beneath the high brick garden wall,
Finding a safe retreat.
Like some small nest securely placed,
With ferns and grass interlaced,
But open to the light,
The hamlets seem to lie at rest
Upon the common's ample breast,
Secure in loneliness of space
From aught that could the charm efface
Of innocence and old-world grace
Worn by ancestral right.
Home of sweet days and thankful nights,
Fair fall on thee the morning light,
Soft fall the evening dews.
Wild winds perchance may sweep the wold
But age, untouched by storm or cold,
In memory's sight thou standest there,
Encircled by serenest air,
In changeless summer hue.
Mary S Cope. 1886


This poem written so long ago in America by Mary Cope is written in tribute to Avebury. At first I was wary of its 19th century romanticism, but reading it again and again made me realise that it had a very special charm in its description of Avebury. After all it was an outside eye that was looking back at the stones and the village, and its neat little manor house serene in its garden. Though I think she got it somewhat wrong as to nuns being at the Priory when monks are mentioned in the history.


so what inspired such eloquence? Our ancestry haunts us all, and Mary Cope came from a strong Quaker family whose forebearers had travelled to America in the 17th Century.
Henry (1793-1865) had established a family 'enclave' at Germanstown and called it Awbury, their house and grounds now are part of the Awbury Arboretum and the following quote explains the reason as to why we find Mary S. Cope writing a poem about Avebury.

"The house he built on that land was named "Awbury" after the family ancestral home in the village of Avebury in Wiltshire, England; as the nineteenth century progressed, the name came to indicate the entire enclave and not just Cope's dwelling. John Haines's and Henry Cope's tracts were augmented with purchases made by Henry's son Francis on the southwest and south later in the nineteenth century. The family enclave was expanded in 1885 with a purchase of land
made by Clementine Cope, Henry's niece, in 1885."

But lets go back to the original Oliver Cope - a tailor who lived in Avebury and took that momentous step to emigrate to America. Gilbert Cope in his genealogy of the Cope family (186l) seems to think that Oliver was not a Quaker when he left England with his wife Rebecca, they seemed to have had three children at Avebury - William, Ruth, and John, Elizabeth being born in America, Oliver must have left England in about 1682, and could have travelled on the same boat as William Penn who also made a voyage in that year. In a Deed of Land he seems to have bought 250 acres from William Penn in the province of Pennsylvania, this he must have done in England as the Deed is dated 1681.


"This indenture made the 5th day of September in the year of our Lord 1681, and in the thirty-third year of the reign of King Charles the second over England, between William Penn of Worminghurst in the County of Sussex and Oliver Cope of Awbury, in the County of Wiltshire, tailor, on the other part witnesseth that the said William Penn, for and in the consideration of the sum of five shillings of lawful money of England to him in hand paid by the said Oliver Cope, the receipt whereof he doeth hereby acknowledge, have bargained and sold, and by these presents doth bargain and sell into the said Oliver Cope, the full and just proportion and quantity of 250 acres within the province of Pennsylvannia"

There is a lovely note by Gilbert Cope at the end of the page in which he states "Abury (sometimes spelt Awbury, Aveburg or Auburn) is an unimportant village in Wiltshire,
about 8l miles west of London. There are none of the Cope name living in or near it at present, neither does the name appear on the family register"


Oliver's arrival in America has a somewhat mixed account in Gilbert Cope's book, Mary is given at one stage as his wife that accompanied him on the voyage and that he came on the boat with William Penn (on his second voyage) in 1701.* This account can probably be considered a bit whimsical, though it does say that they landed at Nameen's Creek (the place where Oliver died) as Oliver's will definitely states Rebecca as his wife.

There is also a note that in May 1682 William Penn sent to Thomas Holme - Surveyor General - a list of the people who had purchased land and Oliver Cope is listed as having five hundred acres. So it would seem that Oliver bought this land whilst he was  in England, probably making two purchases of 250 acres at separate times, the dream of an American future winning over a drab existence in a small Wiltshire village.
John Cope one of Oliver's children is seen as the founding member of the Cope dynasty in America and a prominent Quaker member. 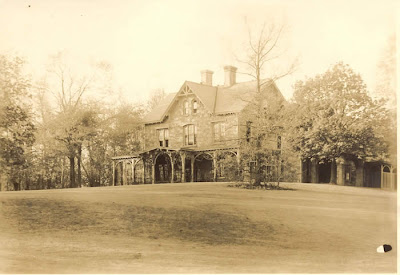 It is the flash of a firefly
In the night;

It is the breath of a buffalo
In the wintertime;

It is the little shadow
That runs across the grass


And loses itself in the sunset.

Enlightenment or perhaps a definition of capitalism at the present time;

"European civilisation has failed. Peoples should have the option to leave." Tero Mustonen of Eastern Finland.

Global warming, population explosion, resource depletion and world poverty are the sure signs of that failure. What has been named as European civilisation in in reality European exploitation of people and nature.
Posted by thelma at 3:45 AM No comments: